Since the late 50s humanity has dreamed of being able give mundane, manual task-based jobs, to robots. Offloading repetitive jobs to machines which will free up our time and allow us to concentrate on creating new ideas and technologies, and theoretically, allowing us to step into the future through huge gains in ‘free time’ leading to a neo-bohemian period of growth.

However, as that dream becomes a reality, previously un-thought-of issues are starting to arise, and paramount among those worries is the resulting lack of jobs for less skilled workers. After all, why would you pay a manual labourer to do a job when a machine can do it faster, more accuretly and quite probably more cost efficiently too? Luckily for most of us this potentially-bleak future is still a few years off, but research has already begun in to who will be the most effected by the robot revolution.

The thinktank Future Advocacy – which specialises in looking at the big 21st century policy changes – said at least one-fifth of jobs in all 650 constituencies were at high risk of being automated, rising to almost 40% in McDonnell’s west London seat of Hayes and Harlington.

The thinktank’s report also found that the public was largely untroubled by the risk that their job might be at threat. Only 2% of a sample of more than 2,000 people were very worried that they might be replaced by a machine, with a further 5% fairly worried. 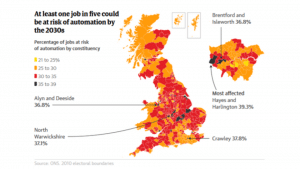 Certainly, the future is not set in stone, the rise of the robots may not be a bad thing, but it may be wise to ensure you keep up to date with the potential outcomes.

More information on this topic can be found at:

Back to Insight Centre
Back to top 7ads6x98y
We use cookies on our website to give you the most relevant experience by remembering your preferences and repeat visits. By clicking “Accept All”, you consent to the use of ALL the cookies. However, you may visit "Cookie Settings" to provide a controlled consent.
Cookie SettingsAccept All
Manage consent

This website uses cookies to improve your experience while you navigate through the website. Out of these, the cookies that are categorized as necessary are stored on your browser as they are essential for the working of basic functionalities of the website. We also use third-party cookies that help us analyze and understand how you use this website. These cookies will be stored in your browser only with your consent. You also have the option to opt-out of these cookies. But opting out of some of these cookies may affect your browsing experience.
Necessary Always Enabled
Necessary cookies are absolutely essential for the website to function properly. These cookies ensure basic functionalities and security features of the website, anonymously.
Functional
Functional cookies help to perform certain functionalities like sharing the content of the website on social media platforms, collect feedbacks, and other third-party features.
Performance
Performance cookies are used to understand and analyze the key performance indexes of the website which helps in delivering a better user experience for the visitors.
Analytics
Analytical cookies are used to understand how visitors interact with the website. These cookies help provide information on metrics the number of visitors, bounce rate, traffic source, etc.
Advertisement
Advertisement cookies are used to provide visitors with relevant ads and marketing campaigns. These cookies track visitors across websites and collect information to provide customized ads.
Others
Other uncategorized cookies are those that are being analyzed and have not been classified into a category as yet.
SAVE & ACCEPT